Chatham offers many forms of transport making it an ideal area to live/work and commute from. As part of the redevelopment plans for Central Chatham in 2011 a new sleek bus station was built to replace The Pentagon Bus Station covering all areas of Medway and Kent. With its modern design and open surroundings, Chatham Waterfront Bus Station presents a welcoming reception to the bustling heart of Medway.

Managed by Southeastern, Chatham railway station is on the main line between Rochester and Gillingham, and is 34.4 miles (54km) from London Victoria. With 2 platforms, one for each direction, each capable of handling 12 car trains making commuting quick and easy.

Not only does Chatham offer the local bus services and a mainline Station, The Kings Ferry and other coach services are also available.

Chatham is one of the Medway towns located within the Medway unitary authority, in North Kent, in South East England.

Chatham Royal Dockyard closed in 1984, but major naval buildings remain as the focus for a flourishing tourist industry. Following closure, part of the site became a commercial port, other parts were redeveloped for business and residential use, and part became the Chatham Historic Dockyard museum, which features the submarine HMS Ocelot among a good many other attractions. Chatham also has military connections; several Army barracks were located here, together with 19th-century forts which provided a defensive shield for the dockyard. Brompton Barracks, located in the town, remains the headquarters of the Corps of Royal Engineers.

The town has important road links and the railway and bus stations are the main interchanges for the area. It is the administrative headquarters of Medway unitary authority, as well as its principal shopping centre.

The name Chatham was first recorded as Cetham in 880. The Domesday Book records the place as Ceteham. Most books explain this name as a British root ceto (like Welsh coed) plus Old English ham, thus meaning a forest settlement. However, the river-valley situation of Chatham is more consistent with cet being an Old English survival of the element catu that was common in Roman-era names and meant 'basin' or 'valley'.

Chatham stands on the A2 road along the line of the ancient Celtic route, which was paved by the Romans, and named Watling Street by the Anglo-Saxons. Among finds have been the remains of a Roman cemetery. After the Norman invasion the manor of Chatham, originally Saxon, was given by William the Conqueror to Earl Godwinson.[citation needed]

It long remained a small village on the banks of the river, but by the 16th century warships were being moored at Jillingham water {Gillingham}, because of its strategic sheltered location between London and the Continent. It was established as a Royal Dockyard by Queen Elizabeth I in 1568 and most of the dockyard actually lies within Gillingham. Initially a refitting base, it became a shipbuilding yard; from then until the late 19th century, further expansion of the yard took place. In its time, many thousands of men were employed at the dockyard, and many hundreds of vessels were launched there, including HMS Victory which was built there in the 1760s. After World War I many submarines were also built in Chatham Dockyard.

In addition to the dockyard itself, defensive fortifications were built to protect it from attack. Upnor Castle had been built in 1567, but had proved ineffectual; the Dutch Raid on the Medway in 1667 showed that more was required. The fortifications, which became more elaborate as the threat of invasion grew, were begun in 1756 as a complex across the neck of the peninsula formed by the bend in the River Medway, and included Fort Amherst. The threat of a land-based attack from the south during the 19th century led to the construction of even more forts.

The second phase of fort-building (1806–1819) included Fort Pitt (later used as a hospital and the site of the first Army Medical School). The 1859 Royal Commission on the Defence of the United Kingdom ordered, inter alia, a third outer ring of forts: these included Fort Luton, Fort Bridgewood, and Fort Borstal. These fortifications all required military personnel to man them and Army barracks to house those men. These included Kitchener Barracks (c 1750–1780), the Royal Marine Barracks (c 1780). Brompton Artillery Barracks (1806) and Melville Barracks (opened 1820 as a Naval hospital, RM barracks from 1905). H.M.S. Collingwood and H.M.S. Pembroke were both naval barracks.

In response to the huge manpower needs, the village of Chatham and other nearby villages and towns grew commensurately. Trams, and later buses, linked those places to bring in the workforce. The area between the High Street and Luton village illustrates part of that growth, with its many streets of Victorian terraces.

The importance of Chatham dockyard gradually declined as Britain's naval resources were reduced or moved to other locations, and eventually, in 1984, it was closed completely. The dockyard buildings were preserved as the historic site Chatham Historic Dockyard (operated by Chatham Historic Dockyard Trust), which was under consideration as a World Heritage Site the site is being used for other purposes. Part of the St Mary's Island section is now used as a marina, and the remainder is being developed for housing, commercial and other uses, branded as "Chatham Maritime".

Chatham has a wide range of services and facilities to meet the needs of residents, workers, and visitors accommodating people of all ages from activities, history, restaurants and bars to shopping and even exquisite walks mainly situated in Chatham Maritime. Below listed are just some of the local amenities the area has to offer.

Arethusa Venture Centre offers sail training and other adventures in Basin 2, and also across the river at Lower Upnor.

The St Mary’s Island Community Centre provides a focus for entertainment and exercise, and offers a large number of activities for kids and adults. Rooms are available for hire for sports and recreation and meetings.

There are three large parks on St Mary’s Island. Finsborough Down, on the eastern side near the port, gives an elevated view across the Island and also has an enclosed dog run area. East and West Chain (named after the ancient maritime defences across the Medway) provide a walk across the spine of the Island.

There are also three play areas for children and teenagers

Dockside Outlet Centre offers a wide range of shops offering fashion and other goods and keen prices. It also houses a food hall and a café as does the Pentagon Shopping Centre running through Chatham High Street.

Co-op run a mini-market in the Ship & Trades building, and a smaller campus shop in Jellicoe House in the University Quarter

Medical care is provided by the Surgery, situated next to the Community Centre on St Mary’s Island

St Mary’s Island Church is a Christian Church based on the Island. It meets in the Island school and is run in partnership with St. Mark's (C of E) Church, Gillingham, Gillingham Baptist Church, and The Medway Towns Group of United Reformed Churches. 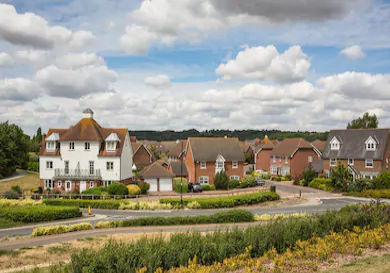