89% of Medway Homeowners are over 35 so how did their Brexit vote affect the Medway property market?
Well it’s been a few weeks since the Referendum vote and we have had a chance to reflect on the momentous decision that the British public took. Many of you read the article I wrote on the morning of the results. I had gone to bed the night before with a draft of my Remain article nicely all but finished, to be presented, at just after 5am, with the declaration by the BBC saying we were leaving the EU. I don’t think any of us were expecting that.
If you want to read a copy of that original Post Brexit blog post, it can be found HERE. In this article, I would like to take my thoughts on from that initial article and now start to see the clearer picture as the dust settles on the UK, but more importantly, the Medway Property Market.
In case you weren’t aware, the residents of the Medway Council area went against the National mood and voted as follows
Medway Council       Remain Votes                       49,889             (35.9% of the vote)
Medway Council       Leave Votes                          88,997             (64.1% of the vote)
Medway Council Turnout    72.1%
I have been reading there is some evidence to indicate younger voters were vastly more likely to vote Remain than their parents and grandparents and, whilst the polling industry's techniques may have been widely criticised, following them getting both the 2010 General Election and the recent Brexit vote wrong, anecdotally, many surveys seem to suggest there was a relationship between age and likelihood to support leaving the EU.
Interestingly, the average age of a Medway resident is 37.7 years old, which is below the national average of 39.3, which might go someway to back up the way Medway voted? What I do know is that putting aside whether you were a remain or leave voter, the vote to leave has, and will, create uncertainty and the last thing the British property market needs is uncertainty (because as with previous episodes of uncertainty in the UK economy – UK house prices have tended to go down).
Interestingly, when we look at the Homeownership rates in the Medway Council area, of the 72,965 properties that are owned in the Medway Council area (Owned being owned outright, owned with a mortgage or shared ownership), the age range paints a noteworthy picture.
Age 16 to 34 homeowners       8,022    or      11.0%  (Nationally 9.6%)
Age 35 to 49 homeowners     22,541    or      30.9%  (Nationally 29.2%)
Age 50 to 64 homeowners     22,909    or      31.4%  (Nationally 30.7%)
Aged 65+ homeowners          19,493    or      26.7%  (Nationally 30.5%) 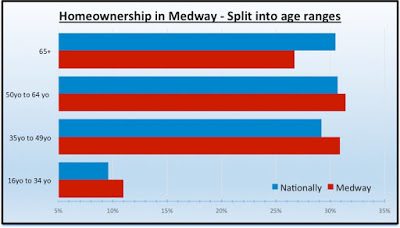 So, looking at these figures, and the high proportion of older homeowners, you might think all the Medway Council area homeowners would vote Remain to keep house prices stable and younger people would vote out so house prices come down- so they could afford to buy?
But there's a risk in oversimplifying this. The sample of the polling firms are in the thousands whilst the country voted in its millions. Other demographic influences have been at play in the way people voted, as early evidence is starting to suggest that class, level of education, the levels of immigration and ethnic diversity had an influence on the way the various parts of the UK voted.
So what I suggest is this – Don’t assume everyone over the age of 50 voted ‘Leave’ and don’t assume most 20 somethings backed ‘Remain’; because many didn't!

Do you have any Brexit concerns? Would you like some free, impartial advice? Feel free to EMAIL ME.

https://docksidekent.com/blog/how-has-the-medway-property-market-performed-since-the-brexit-vote/24286
Go back to the blog